The Forgotten World Highway running between Taumarunui in the Ruapehu District and Stratford in Taranaki is one of the scenic gems of the North Island, and while some dread the idea of driving on gravel, the last opportunity to experience this rustic ride is fast approaching. Lisa McLean tells us more...

Built on colonial bridle paths formed in the late 19th century, the Forgotten World Highway is remote and mysterious to the extreme. It took 50 years to complete from the day it was begun until the day it was opened in 1945. Another 50 years of advocacy and Government funding has finally been allocated to sealing 12 of the forgotten kilometres that wind through the Tangarakau Gorge.

“There’s some extraordinary scenery along here – some of the most unspoiled bush to be seen on any New Zealand roadside, the sheer walls of the Tarangakau Gorge, soaring to 500 metres on either side, to say nothing of the peaks of Taranaki, Ruapehu, Ngāuruhoe and Tongariro floating intermittently into view.”  - AA Traveller

Named as New Zealand's first heritage trail in 1990, road and rail come together at Whangamomona. One of New Zealand’s most remote towns, and its only republic, Whangamomona sees tens of thousands of tourists come through in the summer months. It’s been 100 years since the railway reached here, the last passenger train stopped in 1983, with the freight service ending in 2009. When construction of the railway began in 1901, the line ran through a thriving corridor of farmland, factories, coal mines and forestry. Supplies came in by rail, and goods and resources flowed back out. At one point late in the railway's construction, the town of Tangarakau had a population of 1200 people. 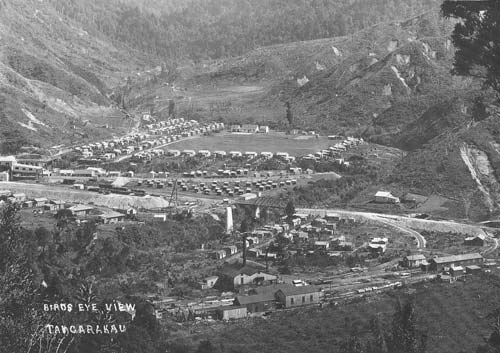 PICTURED LEFT: This is Tāngarākau township at its peak, in 1929, during the final phase of work on the Stratford–Taumarunui railway. The road bridge over the Tāngarākau River has been completed, while the rail bridge is being constructed. In the distance – on the far side of the sports ground – is the school, and around the field is the ‘married-with-children’ housing. The single men’s quarters are next to the road bridge, and the ‘married-without-children’ accommodation is on the near side of the river.

New Zealand’s rugged terrain, rivers and dense forest made it difficult to build the first roads and for many years vehicles struggled with mud, dust and rough surfaces, especially the mill roads which were bulldozed through tussock and scrub. In the 1900’s New Zealanders relied on their horses, no heavy traffic licenses, no certificate of fitness, log books or traffic officers.

“From the turn of the 20th century all an enterprising carrier needed was a team of bullocks, a pack horse, a horse team or a horse and wagon and he was in business as a cartage contractor.” - Ron Cooke, Roll Back The Years

In the early days of transport disaster often struck, nine times out of ten with loads beyond capacity of the conditions.

“We always carried a shovel. It was nothing to have to dig yourself out of the bog” - Roll Back The Years

Concrete was trialed in New Zealand as a street surface in the early 1900s, but it proved expensive. By 1929 there were only 3,000 kilometres of sealed road in the country, less than 3% of the country’s road network. Sealing New Zealand’s road network continued until the 1950s and 1960s, when it accelerated. Between 1950 and 1964 the number of cars on New Zealand roads tripled. Amendments to the Public Works Act in 1947 and 1948 allowed certain highways to be declared motorways. The first stretch of motorway opened in 1950 in Wellington. In 1950 Wellington’s Evening Post explained to its readers what the new motorway was for -

“It is a motorway for motors. Pedestrians may not enter it, nor cyclists; nor will wandering stock, nor the farmer’s milking herd, taking a short cut to the dairy, be tolerated.”

Passing through towns such as Toko, Douglas, Te Wera, Pohokura, Strathmore, Whangamomona, Marco, Kohuratahi, Tahora, and Tatu, State Highway 43 climbs three saddles, the Strathmore Saddle, Whangamomona Saddle, and Tahora Saddle. Whether you’re taking the few hours drive or a few days bike ride, there are many reasons worth stopping on this 155km highway. Early in the 20th century it was the site of a tent-camp township for railway construction workers and their families. Aside from the natural beauty it showcases, it also serves as an important freight route for beef, lamb and dairy businesses, forestry, and the blossoming honey industry.

PICTURED LEFT: The opening of Toko Station in 1902.

While work on the highway, and around the country, was halted during lockdown, Waka Kotahi New Zealand Transport Agency (NZTA) continued to work on the completion of the design for sealing the Tangarakau Gorge. In addition to sealing the road, the upgrade will include roadside safety barriers in high-risk areas and signage advising drivers of upcoming hazards and safe travelling speeds on the road which is frequented by motorcyclists, locals and tourists in campervans alike.

For Forgotten World Adventures the upgrade of SH43 can’t come soon enough, in the company's first season, around 2,300 people rode the rails, a figure that more than doubled in its second season. Sealing of the unsealed section of the Tangarakau Gorge is expected to drive gains into the Taranaki and Ruapehu regions of up to $45 million over 40 years with the projects forecast to increase visitor numbers by around 13,000.

The team at FWA is ready for the influx, sharing the Forgotten World with the wider world from rail, from river, and, from a much smoother highway.

Plan your next adventure and come get lost in the Forgotten World. Leave your world behind, and come explore ours. View our amazing tour offering here.