Book now, pay later! Secure your summer tour with ZERO DEPOSIT during the month of August!

The scenery before him was raw and beautiful. Inspired by the Otago Rail Trail, Ian understood the sense of adventure traveling down a railway line creates.  His challenge was to find a safe and easy operation that offered the journey of a scenic train ride in the majestic Forgotten World.

Following a comprehensive process of investigation, innovation and design and help from expert engineers the Forgotten World rail carts were created. With a plan in place, including cutting-edge safety systems, the lease was secured from Kiwi Rail.

Forgotten World Adventure was real, giving visitors the exciting opportunity to self-drive along the 142 kms of heritage rail tracks during the summer season of October through to May, immersed in the remote and stunning New Zealand landscape.

Now under new ownership with Grant Ross and his partner Laura, FWA looks forward to beginning a new and exciting chapter.

Our General Manager, Kara Matheson, and/or owner, Grant Ross, are available to speak to any interested groups on the Forgotten World experience.  A fun presentation explaining some of the history of the SOL rail line and the entrepreneurial journey of Forgotten World Adventures. To contact Kara click here. We are so thankful to all those who voted for us in the People's choice award and so incredibly excited to announce we won for the second year in a row! 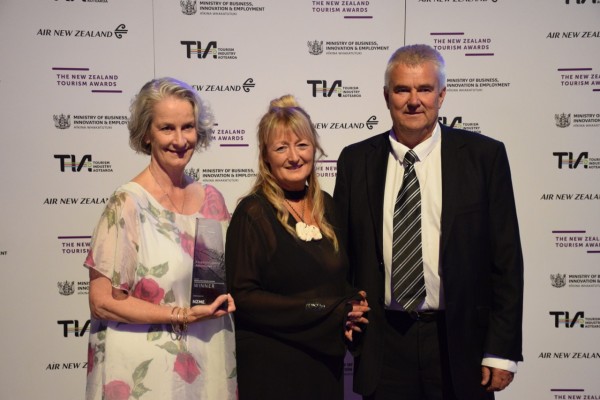 ...the men often had no dry clothes for weeks on end, and the camps were often plagued with flies, poor sanitation

The Forgotten World Adventure began its life as the Stratford-Okahukura railway line (SOL). Its construction is significant in New Zealand and its rich history characterises the essence and spirit of the people who toiled in isolated and difficult conditions to develop the remote interior.

Building the railway began at Stratford in March 1901 and took almost 32 years to complete. Unlike the parallel Forgotten World Highway, which traverses four rugged mountain ranges and remains a challenge for motorists, the railway line mainly followed valley routes.

At a cost of £2M ($9.4B today) is was a substantial investment and considerably hard work for the teams of men involved who used pick axes and shovels to carve out the 24 tunnels by hand a total of 10.4km.

Huge cuttings were also hand-dug and bridges built to cross the lowest spans used a unique method still admired by engineers today. It was no small task; the men first built a timber trestle across the divide then dumped filling along its length until the frame was completely buried. The largest, about 120 metres long, contained 1000,000 cubic metres of soil and took three years to complete.

The Workers and People

Workers lived in camps along the line and earned less than $1 a day for their nine-hour shift. Little evidence remains of Tangarakau, the main camp and in its 1925 hey day 1200 people lived in the bustling township.

Nearby, in the spectacular Tangarakau Gorge, is the grave of pioneer surveyor Joshua Morgan who died in 1893. This extraordinary man fell ill while surveying the road linking Stratford and Taumarunui and despite a desperate dash by his colleagues to seek medical help Morgan not survive to see the historic railway line or road to completion. His grave acts as a memorial to all the men who helped establish the Forgotten World Railway.

The use of the railway line

The people who settled this area were hardy pioneers, isolated in their remote communities. The line was an essential link to the outside world and sawmills, coal mining and farming were only viable because of the rail connection. Evidence of the 15 stations along the line is still visible but the bustle of transporting stock and supplies is long gone.

Until 1983 passenger trains also used the line but improved roads and transportation options, as well as the SOL being notoriously difficult and expensive to maintain, its days were numbered. A partial derailment in 2009 that damaged a significant section of the track initiated a decision to mothball the line.

The railways decline created a new opportunity and 2011 heralded the next stage of its history. Forgotten World Adventures secured a 30-year lease over the line giving visitors access to this iconic piece of New Zealand railway history.