Born and bred in Taumarunui, Forgotten World Adventures (FWA) guide Ryan Gram swore there were two things he would never do, “tertiary education or move to Auckland”. But here he is - a graduate of Auckland’s South Seas Film and Television School. Lisa McLean tells us more...

Ryan’s first job out of High School in 2017 was at FWA doing “grunt work”. At 6 '2 grunt work is something Ryan is good at. He’s a volunteer fireman for the Ruapehu Rural Fire Force and a member of the Ruapehu Civil Defence team. As part of the fire service Ryan trains once a fortnight with his crew in winter and once a week during the summer. 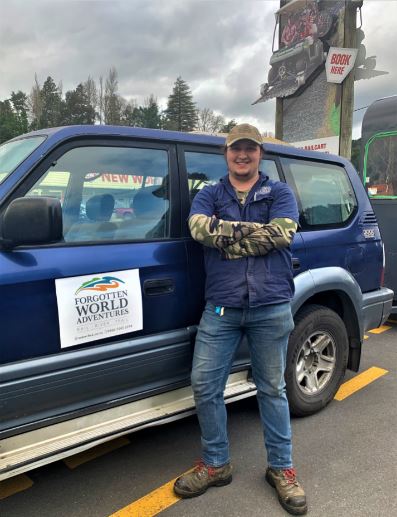 There's no rest over winter for the FWA team. Ryan Gram has spent the off-season painting, sorting, cleaning and clearing between the Okahukura and Whangamomona bases in the Forgotten World.

Back home in Taumarunui this summer, while working as an FWA guide, Ryan was one of the many volunteers who attended a huge  fire  call out at Piriaka, beside the Whanganui River, alongside crews from Mananui, Taumarunui, National Park, Whakapapa, Turangi and Owhango as well as the Defence Force. Like anything that needs to get done in the district, it was all hands on deck. This community spirit is something Ryan sees reflected in the team at Forgotten World Adventures. Ryan was first put on the payroll as a conductor after he was spotted pitching in alongside his Dad Brett, who was working for the operations team.

In 2020 Ryan stepped up into a Guide role and says he hasn’t stopped learning yet.

“You pick up all sorts of things from each guide you work with, they all have a different skill set to offer.”

Ryan says Operations Manager Kara Matheson, in particular does a good job of making sure you are competent and confident before you go out. But Ryan’s first season as a Tour Guide at FWA will go down in memory as 2020, the year that COVID-19 changed everything.

“Pre lockdown, initially everyone was like, yeah she’ll be right, and then, it wasn’t.”

The Forgotten World Adventures team followed government guidelines around social distancing, but that’s something that doesn’t come naturally to Kiwis.

“One of the cool things was always shaking hands with people when they’re getting off the bus and we couldn’t do that anymore.”

Then there was lockdown and Ryan stepped into his civil defence uniform to “work crowd control” at the local supermarket.

Ryan is looking forward to getting back on tour in October and has spent the winter pitching in with the rest of the FWA team prepping for a bumper season.